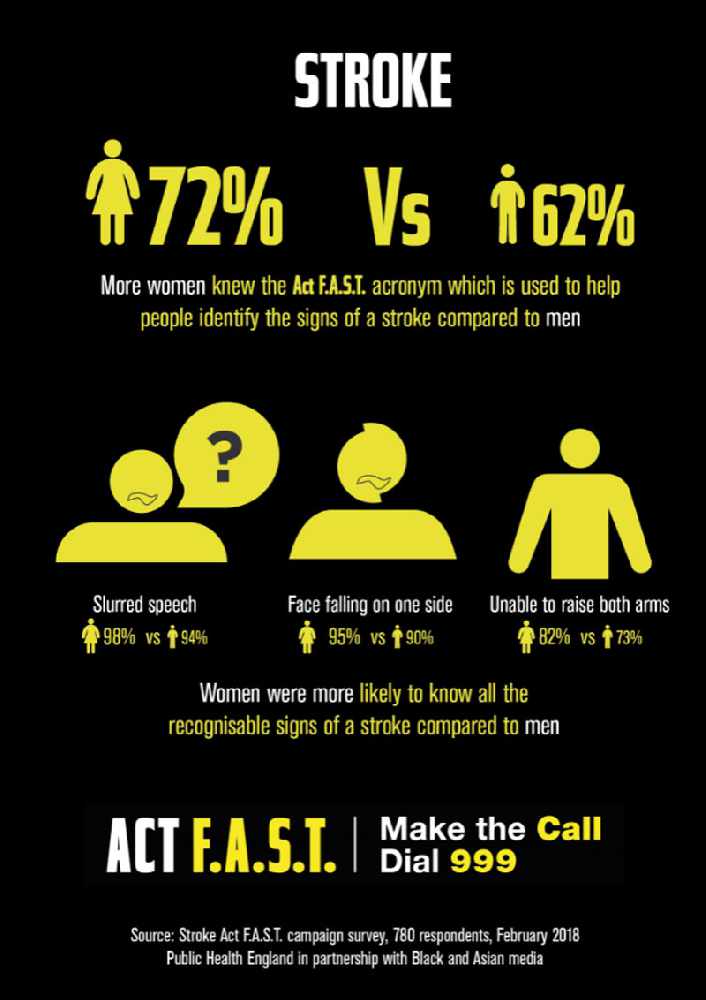 Knowing any single one of the signs of a stroke and calling 999 immediately if you spot one is crucial – the faster you act the better the chances of a good recovery. However a new survey reveals that women were more likely to know the three most common signs of a stroke compared to men, despite men being at a higher risk of having a stroke at a younger age than women. Women were also found to have more knowledge of the Act F.A.S.T. acronym which is used to help people identify the signs of a stroke (72% women vs 62% men).  F.A.S.T. stands for:

The survey designed specifically for Asian and Black communities to understand the current levels of knowledge about stroke highlight that some of the key Act F.A.S.T. stroke campaign messages are getting through but there’s still more work to be done.

Stroke is a medical emergency, however woman were more  likely than men to say that they would seek help quickly if they notice someone showing the signs of a stroke. The Act F.A.S.T. stroke campaign stresses the importance of acting fast and calling 999 as soon as you see even one of the signs developing in yourself or someone else.

While most people (84%) were aware that the faster stroke patients receive medical treatment the greater their chances of a better recovery, surprisingly, almost 40% were not aware that getting treatment fast could help avoid long-term disability. Treatment is more effective if it is received within 3 hours of the onset of a stroke.

Professor Julia Verne, Public Health England Director: “We’d like to thank the media for getting behind this survey and everyone who participated, the response has been great. The results show that some of our ACT F.A.S.T. messages are getting through to those most at risk of stroke. However, it’s clear that we need to work harder to increase awareness of all the common signs of stroke and improve understanding that acting fast can save lives and prevent long-term disability.”

Actor Bhasker Patel: “I’m pleased that our community has taken time out to participate in this survey. The results are fascinating and interesting. It’s great to know that we have high levels of awareness of the stroke signs but we must not be complacent. We need to do more to make sure that we continue to spread awareness of all the signs and encourage everyone to act fast, without delay when they notice any one of the signs of stroke. I hope these results will go a long way to help inform future ACT  F.A.S.T. campaigns.”